Five People Who Changed The World 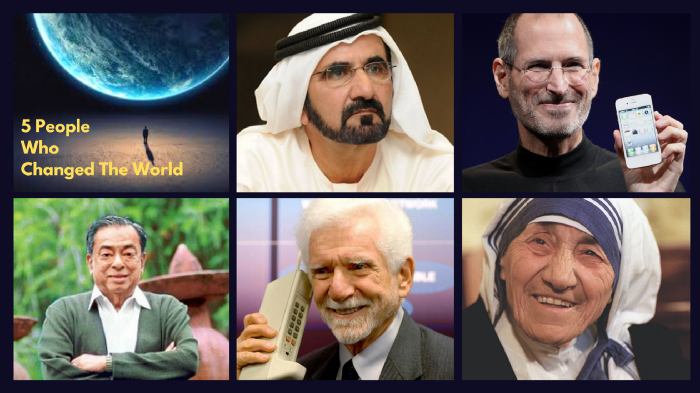 Can one person bring about a change that can impact the world? We often think not and yet we have countless examples of people that have changed the world.

One morning while walking on the beach I saw a man, at some distance from me, performing a strange dance. He would bend down, touch his feet and then fling his arms across his head in a circular motion. As I came closer, I saw that he was picking up crabs from the sand and hurling them into the sea. He said that the crabs were washed ashore and if they did not return to the safe confines of the sea the rising sun would bake them to death.

This is a story that inspires me that one can change the world, one act at a time. I share with you a few great people that I admire for making a big difference. These are like catalysts for change that made their passage on earth impactful.

Sheikh Mohammed bin Rashid Al Maktoum, Vice President and Prime Minister of the UAE and Ruler of Dubai is the man behind UAE’s transformation into a world attraction and investment destination. His visionary approach turned Dubai from a dusty city into a smart city, the bustling metropolis of today.

As a trailblazer, he set benchmarks of excellence for the whole region. Millions of people travel to UAE to reap the fruits of his transformational leadership in the form of booming economic and trade opportunities.

I look up at him as the leader that brought about the largest impact on the lives of millions across the world.

Steve Jobs created a larger than life impact on the world of technology, innovation, design and entertainment. His passion for perfection and pursuit for excellence made Apple the company as we know it today.

Apple’s explosive control over the consumer-tech market impacted the way we interact with the Tech World. Groundbreaking inventions- the iMac, iTunes, iPod, iPhone and iPad changed the game in the industry. The people we love, and care are just at the touch of a screen away. Steve Jobs, a man of unbelievable imagination, is truly a legend in the concept of innovative and interactive design.

Mother Teresa (The Missionaries of Charity)

Mother Teresa is an epitome of compassion and care for the downtrodden of the society. This frail woman devoted her life caring for sick and abandoned in the slums of Calcutta, India.

Mother Theresa with her selfless services created a lasting influence on the world around her. She inspired mankind by showing what universal love means. She emphasized, ‘By helping others, we help God’. Many humanitarians have served the world, but Mother Teresa really stands out, not only for her goodness, but for her success in spreading a message.

Mr. Cooper, a wireless visionary and a serial entrepreneur is the brain behind the concept of the mobile phone. He put Motorola at the forefront of a burgeoning portable industry and reshaped the telecommunication industry in a new direction with the genesis of handheld technology.

What makes Mr. Cooper unique is his rare combination of technical knowledge, engineering skill and marketing vision. Due to his amazing display of ingenuity, the cell phones became an indispensable part of our lives and work.

Amul is one of India’s iconic brand that spurred the White Revolution and turned India into the world’s largest milk producing country. The main architect of this revolution was Dr. Varghese Kurien who eliminated middlemen and linked farmers directly to consumers. With enormous expansion of fresh milk production and gradual diversification into milk related products, millions of Indians benefited from the nutrition of Amul. The quirky advertisements of the Amul girl is so popular in every Indian home. All thanks to Dr. Kurien.